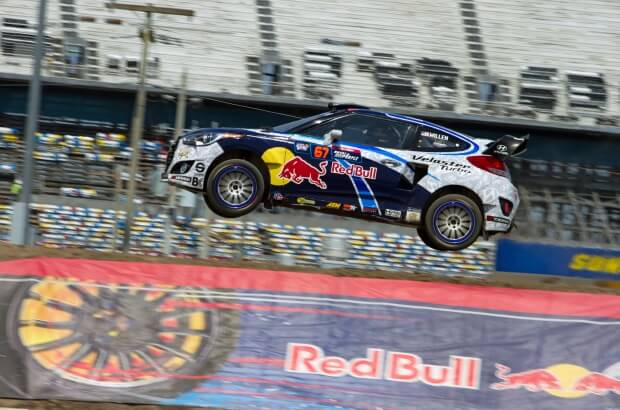 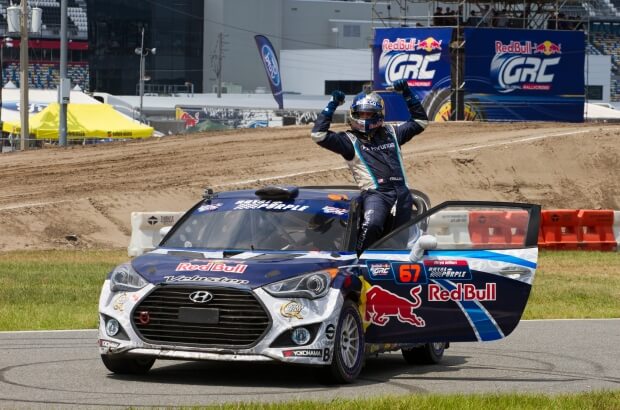 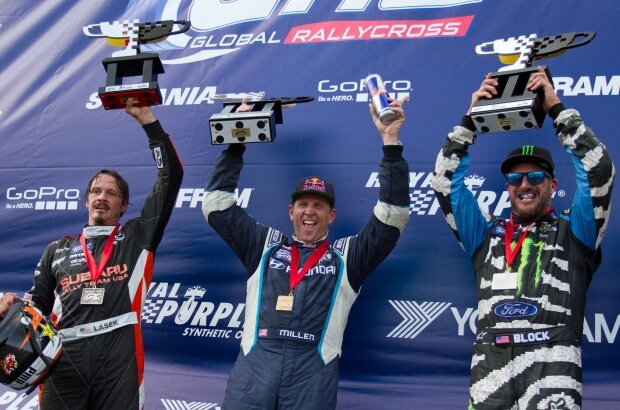 It was a banner weekend for Hyundai/Rhys Millen Racing at Daytona International Speedway, as Rhys Millen earned the first main event victory of his Red Bull Global Rallycross Supercars career on Saturday in the HRE-equipped, #67 Red Bull Hyundai Veloster Turbo. Tyler Benson added a third place for the team in the accompanying GRC Lites racing, making Hyundai/RMR only the second team in series history to earn podiums in both classes in the same Red Bull GRC event, the first held at the “World Center of Racing.”

“It’s fantastic to come to a venue like this, that has such a rich history in US motorsport,” said Millen after the victory. “My first visit here was last year for a TV show, and to come back here now with a competitive setup and to achieve what we did today, I wouldn’t have thought it possible three or four races ago. And to do it on this sacred ground—what a phenomenal opportunity to go down in the record books as the first winner here.”

A test session at Florida International Rally & Motorsport Park earlier in the week built the team’s confidence for Daytona, which featured lengthy paved sections to the test course. Millen posted the fastest lap time in qualifying before a penalty struck his fastest lap from the books, dropping him to fourth, and would have won his second heat race if not for a cam belt failure that disabled his car as he led.

In Saturday’s semifinal, Millen dodged trouble caused by Joni Wiman’s stall in turn three, climbing to second before getting around Bucky Lasek for the lead. His semifinal victory gave him the pole for the main event, which he led from the green light to the checkered flag, holding off a hard-charging Ken Block in the finest performance of his Red Bull GRC career.

“To my team, really, is where I need to tip the hat,” Millen added. “We had a test on Monday and changed some of the front differential settings. And the suspension that we had upgraded the car to all year had a mis-machined part internally, so that was sent back to the manufacturer on the break from Charlotte, so we updated the suspension. The car put a huge smile on my face on the test on Monday.”

Teammate Emma Gilmour overcame adversity throughout the weekend to score an 11th place finish, the best of her Red Bull GRC career so far. Contact knocked Gilmour a lap down in her semifinal, but in a last chance qualifier loaded with four of the top five drivers in the series standings, she hung on to finish within seconds of transferring to her first-ever final.

“We had a few problems in the last event with Rhys’ car and my car, and there was definite improvement in this event,” said Gilmour. “In each event I do, I just get more comfortable in the car, and we keep on fine-tuning it for my style. It’s all just starting to come together. We sort of got caught up in the semifinal and had a really tough LCQ with the likes of Block and (Scott) Speed. So I felt a bit unlucky, but it’s a great day for the team.”

In GRC Lites, Tyler Benson qualified fifth and finished fourth in both of his heat races, before claiming the first podium of his career in the final. Benson passed Blake Fuller in the joker lane on the second to last lap of the event after spending the entire race tracking his opponent down for the podium.

“We definitely had to earn it,” said Benson. “We fought and battled all weekend, in crazy heat, with the car overheating. The dirt was just so slick and the car was just not happy about it. It was definitely a struggle, but we fought hard and we finally earned it. It feels good because it definitely wasn’t handed to us. We had to battle and play catch-up, and that’s what we did.”