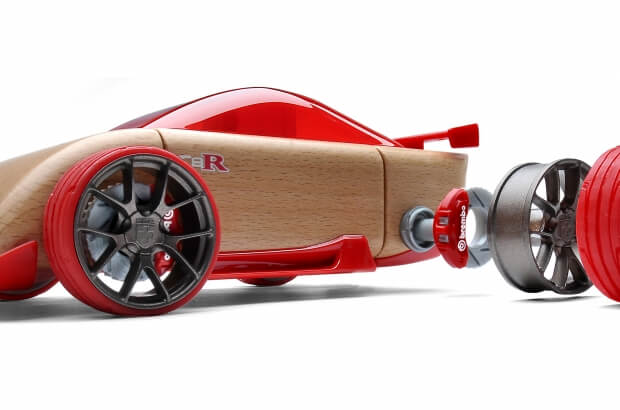 With more than 10 years in business, The Automoblox Company has put millions of Automoblox cars in the hands of children around the globe. The company kicks off 2016 with its first-ever overhaul of its flagship Automoblox Originals line.The heart of the all-new Automoblox Originals line is the company’s global marketing partnership with Brembo®: the world leader and acknowledged innovator of brake technology for street and performance automobiles.

“Brembo’s association with Automoblox will put Brembo components in the hands of future generations of car buyers,” said Dan Sandberg, Brembo North America president and chief executive officer. “It is fitting that we partner with Automoblox, a company that is using innovation to set new standards in automotive toys.” Colorful Brembo brake assemblies are the newest interchangeable Automoblox component and are standard equipment on most 2016 Automoblox cars. “We’re so thrilled to be partnering with Brembo and we’re certain this new mix-and-match feature with its tactile twist action adds an exciting new dimension to Automoblox,” explains Patrick Calello, Automoblox Co-Founder.“With Brembo as a partner, the credibility of Automoblox gets a big boost as a real car brand for kids.”

Credibility gets a further bump with a partnership with California-based HRE Performance Wheels: manufacturers of the world’s best custom forged wheels for Motorsport, Performance, SUV and Luxury vehicles.“We can all remember our first toy cars as kids,” said HRE Wheels President, Alan Peltier. “Automoblox is teaching kids to not only love cars, but to also embrace the idea of customizing and making them your own. Individualization is what we specialize in at HRE, so we’re happy to share that with our own children and all future car nuts.” HRE wheels adorn some of the world’s most exclusive cars and now the HRE P101 wheel, finished in bronze, is standard equipment on the 2016 Automoblox C9-R sportscar. Read the full story about Automoblox and see more photos here on V3LLUM.