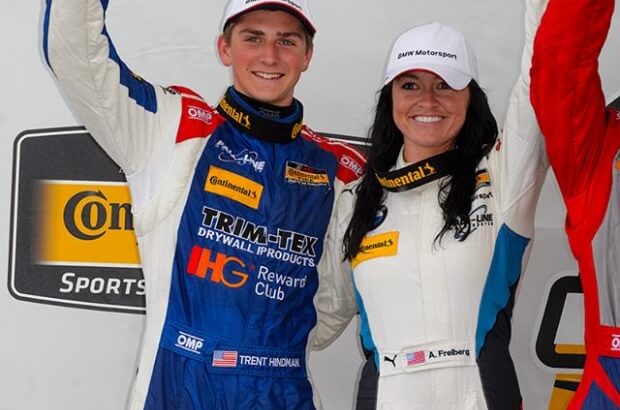 Fall-Line Motorsports drivers Trent Hindman and Ashley Freiberg scored a second-place victory at a wet Watkins Glen this past weekend in the HRE-equipped #46 BMW M3, which performed strong in the rain. Freiburg began the race in 8th place but worked her way up to 3rd position before handing the wheel over to Hindman who pushed and locked the car in second place before the race was red-flagged with a few laps to go.

Ashley Freiberg: "What a day. It was great to drive in the rain again; it's been a while for me! I am really happy with second place; Fall-Line made our IHG Rewards Club/ Trim-Tex BMW wicked fast in the super wet conditions, so it was fun to move our way toward the front! It's a bummer that we couldn't finish the race under green to try and fight for the win, but we will take it! Let's go for that win at Mosport!"

Trent Hindman: "It's such a great feeling to finally be back up on the podium. As soon as the rain starting coming Saturday morning, I knew we had an excellent chance to win because our M3 is an extremely strong car in the wet. Ashley drove a very clean, smart stint and that was massive. It was unfortunate that the race ended under yellow because I genuinely felt we would've been able to work our way past the 6. I'm so proud of our Fall-Line crew, and as always a huge thank you to Trim-Tex, IHG rewards club, and Top 1 Oil. We're going to be charging hard to get that win in Mosport."

Michael Harvey, Fall-Line Motorsports Team Manager: "It was great to get back on the podium. The Fall-Line Motorsports IHG Rewards Club, Trim-Tex BMW took to the rain like a duck to water with both Ashley and Trent driving exceptionally well in very tricky conditions. The Fall-Line crew did a marvelous job this weekend and with perfect strategy we were able to compete for the win. Unfortunate that the race ended under yellow as we feel we had a real shot at the win. It was especially exciting to perform well as we had both BMW and IHG Rewards Club on-site to share in a great podium finish. Now we move across the border to CTMP where we will be happy to see more rain."

With only six races remaining, the #46 car is 7 points outside of the leaders and is still very much in the Continental Tire SportsCar Challenge championship fight.